Most of these works are from a collection of Tim Johnson’s paintings built up over several decades by his father-in-law Sir Ronald Elliott and later passed on to his daughter, Johnson’s first wife. Together with a cohesive group of small canvases from a pivotal moment in the artist’s development, they map out Johnson’s trajectory as a painter from one of his earliest exhibited works through to the emergence of the style with which he is now identified.

The earliest work, Che 1969, is from before the artist abandoned painting for conceptual and performance works in the early ‘70s. It predates Johnson’s first solo exhibition at Gallery A in 1970. Images of Che Guevara in life and death on the raised sections testify to Johnson’s youthful immersion in the zeitgeist of those tempestuous times.

A few years later, courtesy of an innovative NSW Education Department scheme to put practising artists into schools, Johnson briefly fronted art classes at Kogarah High School. As the scene depicted in Betty 1973 suggests, classroom management was not his strong point. However, his students responded to the freedom with an outpouring of creativity that influenced Johnson’s return to a more radical exploration of his own painterly potential, as seen in Untitled Landscape 1972 and other works on paper from this time. Norfolk Swamp 1973 marks the artist’s move back to canvas. The Whiteley-esque Hua Hin 1976, painted during a journey through India and Thailand, depicts the spectacular gardens of the historic Railway Hotel.

After 1976, Johnson’s artistic focus shifted to Sydney’s wildly exuberant pub rock scene and its innovative punk aesthetic. In 1982 the artist undertook a Master of Fine Arts at Sydney University, including a screenprinting course at the Tin Sheds where he produced a body of punk-inspired work including The Other Side 1982 of vocalist Rob Younger’s post Radio Birdman band. From the same period is the series of canvases including Radio Birdman/New Race 1982 documenting Radio Birdman and New Race, a ‘concept band’ consisting of members of Birdman and seminal 1960s Detroit bands Stooges and MC5.

A developing interest in Aboriginal art took the Johnsons to Alice Springs in 1980, a time when there was no interest in Papunya paintings from public collections or the private market. Hoping to build on the Johnsons’ art world connections, Papunya Tula Artists’ manager invited them to Papunya to meet the founders of the desert art movement and the following year enlisted Johnson to ‘hold the fort’ while he took a collection of paintings to the US. Johnson worked out of the ‘artists house’, Papunya Tula’s headquarters in Papunya, forming the friendships that facilitated his later collaborations. Returning to Sydney, he began a series of paintings of the artists whose inspirational example underpinned his own whole-hearted re-embrace of painting.

Johnson’s dotting of canvases began with an early experiment conducted during a family holiday: Thredbo 1984, in which the dotting mimics the landscape it overlays. Another early experiment, Amida 1984, shows Johnson beginning his still ongoing exploration of Buddhist imagery. Dante Dull Knife and Short Bull 1990 shows the artist diverging into Native American imagery after a pilgrimage to the Pine Ridge Reservation in South Dakota. Sir Ronald’s final purchase, Fragments II 1991, unites these disparate imageries in an archetypal Tim Johnson dotted field of gold. 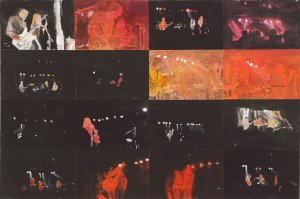