"I first saw Papunya painting in about 1977, when I'd been painting again for about five years, but I made my first contact with Aboriginal artists in 1980. When I first went to Papunya, I took photographs of people with their paintings, and when I got home I started painting the photographs. I was absorbing new ideas about painting from the work I was seeing. ...So I was using painting to document, and putting the performance into the process of painting. I was interested in the way Papunya painting and most Aboriginal art used imagery in the same way we use language - to tell a story, taking an overview like a map" (Tim Johnson interviewed by Nicholas Zurbrugg in Wayne Tunnicliffe & Julie Ewington, Tim Johnson - Painting Ideas, QAG & AGNSW, 2009, exh. cat. p.44) 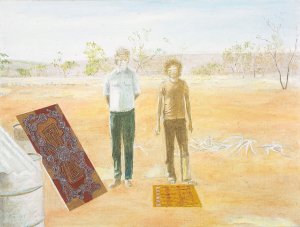