The Other Side, 1982
screenprint, printed in colour inks, from multiple stencils on paper
19.5 x 24.5 cm (print size)
signed and dated ‘Tim Johnson 1982’ (lower right) and inscribed with title ‘The Other Side’ (lower left)

This print depicts The Other Side, a shortlived band from 1978-79 formed by singer Rob Younger and drummer Rob Keeley from Radio Birdman, along with Clyde Bramley on bass and Charlie Georges on guitar, both from The Hellcats. 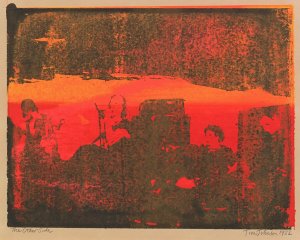