“Tim Johnson is probably the most stimulating of the new talents. Despite the careful three-dimensional tailoring of the canvases, the impact is one of free-wheeling imagination” (James Gleeson, reviewing Four Orientations, Gallery A, Sydney 1969 in ‘Art Review’, Sun, 8 October 1969, p. 52) 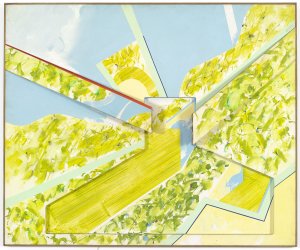