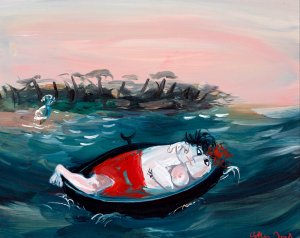 ☆ Add to wishlist
Few artists made so pervasive a contribution to Australian art in the twentieth century as Arthur Merric Bloomfield Boyd AC OBE (1920-1999). A painter, ceramicist and sculptor, Boyd’s expressive exploration of landscape, figure and history painting left an indelible mark on the trajectory of Australian art.

Born in 1920 in Murrumbeena, his father and his two grandfathers were all artists of acclaim, connections that could have been as much an impediment to Boyd’s art as a cause for his success.  At 17, he held his first exhibition at Seddon Gallery, Melbourne, before which time he fell under the spell of the Heidelberg School.

Conscripted into the Cartographic Unit of the army in 1942, Boyd turned to a darker palette and textured brushstrokes of expressionism as a clearer means of depicting the chaos of the world. He was taught painting by Danila Vassilieff, befriended the Israeli-born social realist Yosl Bergner, and became one of the so-called Angry Penguins, sharing a studio with John Perceval. At the same time, he studied the paintings of Breughel and Bosch, whose religious zeal aligned with his own spiritual upbringing. Following their eschatological scenes of Biblical stories and end-times paintings, sex, love and death – the perennial concerns of modern art – became the cornerstones of Boyd’s creative output.

From the 1950s, Boyd began creating sculptures and ceramic artworks, many painted with natural and figurative motifs in his distinctive, emotive style. At the same time, he began to raise issues of the treatment of Aboriginal Australians in his art after travelling to Central Australia in the 1950s. This understanding of country and the Australian landscape underpinned his recontextualising of biblical narratives to the Australian bush, a practice he continued even while living in London as one of the "Antipodean" figurative painters who resisted the pull to abstraction.

In 1971, on his return to Australia, he settled at Bundanon, New South Wales, where he continued to raise political issues, including the complicated history of Australian occupation and military history on the occasion of the First Fleet’s bicentenary in 1988. In 1993, a major retrospective was held at the Art Gallery of New South Wales. Later that year he and his wife, Yvonne, donated their property on trust for the benefit of the Australian people.

Arthur Boyd represented Australia at the Venice Biennale three times in 1958, 1988 and 2000. He was appointed an Officer of the Order on the British Empire in 1970 for his service to the arts and was later made a Companion to the Order of Australia in 1992 on the same basis. In 1995, Boyd was made Australian of the Year and was honoured by Australia Post in a 1998 series of stamps.