In her early series R.S.V.P. and Ensemble, Susan Norrie was inspired by US artist Robert Rauschenberg’s use of found images screen-printed onto his paintings of the early 1960s. Often incorporating three dimensional objects, these were some of Rauschenberg’s most important works. Screen-printing allowed him to combine media imagery, signs, fabric patterns, etc, in works that were influential on other artists, including Andy Warhol. In her own take on this technique, Norrie selected three or four images - a group of children studying music, a whistling boy, etc - and built the series around them. She also used decorative motifs derived from ironwork and fabric to tie together the figurative elements.

In the pink-toned Ensemble #1 the music students dominate, with decorative flourishes also quite visible. Ensemble #3 is a more experimental work, with the music students central and the balance of the painting an exercise in screened textures. It is harder to see - ie, grasp the essential imagery - than Ensemble #1, but is quite beautiful nonetheless. The surface is dry, but unlike #1 it appears never to have been varnished. In this way it reads a little like the surfaces in her 1989-90 series of paintings Peripherique, which was inspired by her stay in France after winning the Moet & Chandon Award in 1987. 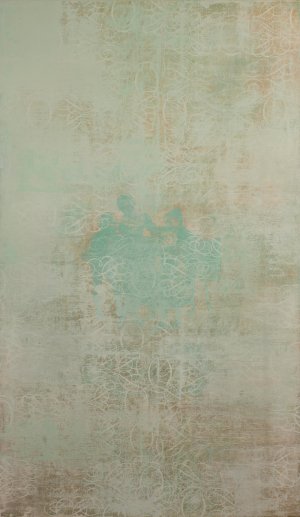