Provenance
National Trust of Australia, S H Ervin Gallery, Sydney
Acquired from the above on 4 December 2008 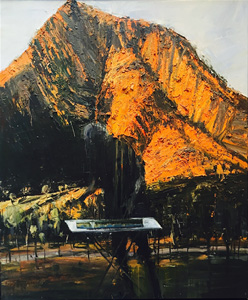 Courtesy of the artist and Watters Gallery, Sydney

☆ Add to wishlist
Born in Christchurch, New Zealand in 1956, painter Euan Macleod moved to Australia in 1981 and has since lived and worked in Sydney. The dominant theme running throughout Macleod's oeuvre is the relationship between the human figure and the landscape. Using a palette of muted tones, his paintings often take on a dream-like quality, however this element is grounded by decisive brushstrokes that tie the works to the physicality of their maker. Resisting specific representation, Macleod's paintings merge recollected landscapes and personal symbolism, and often resonate with viewers through memory and subjective experience.

In 2010, a survey exhibition, Surface Tension: The art of Euan Macleod 1991-2019, was held at S.H. Ervin Gallery, Sydney, touring to five locations in Australia. In 2017, Macleod had a touring survey in New Zealand, Euan Macleod - Painter to four locations. Macleod's work is held in collections across Australia and internationally, including the National Gallery of Australia, Canberra, the Chartwell Collection, New Zealand and the Metropolitan Museum of Art, New York. Macleod is the recipient of a number of prizes, including the 2006 Blake Prize; the 2001 Sulman Prize; and the 1999 Archibald Prize, awarded for his self-portrait Head like a Hole.