Provenance
Roslyn Oxley9 Gallery, Sydney
Acquired from the above by the present owner in 2003

Another example of this image is in the collection of the Art Gallery of New South Wales, Sydney

"Dorothy lies inert, perhaps delirious, on a lion's lap, resplendent in a red costume with tiny sparkly shoes and a bow in her hair. Deacon's rendition of the Judy Garland Technicolor classic - 'The Wizard of Oz' (1939) - replaces the enchantment of the dazzling land of Oz with the TIn Man holding an axe adjacent to a dishevelled Scarecrow. This is no Emerald City. Positioned below a row of poppies, Deacon's title alludes to 'tall poppies' and an Aussie version of this famous road movie. Here traits are exposed, feelings and mixed emotions uncovered in a parodic setting. Characters seem to be acting up and acting out." (N King, 'a laugh and a tear in every photo', ''Destiny Deacon: Walk & don't look blak', exhibition catalogue, MCA, Sydney, 2005, p. 18) 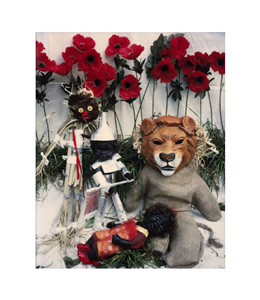 ☆ Add to wishlist
Destiny Deacon was born in 1957 of K'ua K'ua and Erub/Mer peoples in Maryborough, Queensland. She is a photo artist, video maker, performer, writer and broadcaster who stimulates ideas about Aboriginal politics. She began to practice as an artist in 1990 after completing a Bachelor of Arts in Politics at The University of Melbourne in 1979 and a Diploma of Education at La Trobe University, Melbourne in 1981 and, working as a history teacher. Her first solo exhibition, 'Caste Offs' was held at the Australian Centre for Photography, Sydney in 1993.