Provenance
Stills Gallery, Sydney
Acquired from the above by the present owner in 2004

"The kookaburra is a museum object, a once-living bird, captured for the institution to ensure a complete display of bird species, and stuffed by a taxidermist. Andrew has re-invented the display bird, hiding its approved museum status as a representative of its species, and endowing it with a flicker of existential drama in the mirror-image arrangement. The two birds convey the dilemma of self and the other: is it possible for the self to know the other? Is the other always only a reflection of the self? In Andrew’s theatre of dreams, they are fated to face away from each other, silent and still." (M Langton, 'Brook Andrew: Ethical portraits and ghost scapes', NGV, 2008) 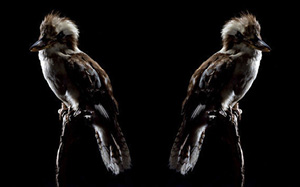