This augmented Polaroid image of Dorothy in her ruby slippers, belongs to Deacon’s Oz series. Made in the lead up to the Sydney Olympic Games, Deacon pointed her camera at yet another set of self-fashioned dolls, to re-interpret characters from the 1939 MGM classic motion picture The Wizard of Oz.

This series is seen as the artist’s reminder to society at large that history as we know it, was written just like any work of fiction. ‘Through her tableaux of assembled Koori kitsch dolls, performing in-character the roles handed to them, Deacon demonstrates in Oz Games and Under the spell of the poppies how the construction of identity is an old game and one that she can play too.’ (Art Gallery of New South Wales Photography Collection Handbook, 2007)

While her playfulness displaces the difficulty of many of her subjects, it relaxes the viewer enabling tough themes (including Aboriginal deaths in custody, mandatory sentencing, poverty, and violence) to be brought into full view, she is no Mary Poppins offering a spoonful of sugar to make the medicine go down… In her pictures, beauty, exuberance, tenderness and play exist in the same frame as that which poisons them.’ (http://www.roslynoxley9.com.au/news/releases/2003/08/14/53/) 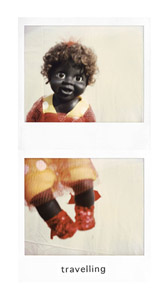