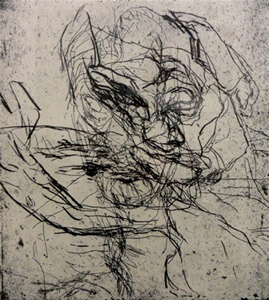 ☆ Add to wishlist
Born in 1945, Mike Parr grew up in rural Queensland before moving to Sydney in the late-1960s where he continues to live and work. He co-established Australia’s first independent artists’ space, Inhibodress, in inner Sydney in 1970 and became a formative influence upon the development of conceptual art and performance art in Australia. Over the course of his career, Parr has engaged with ideas of endurance and duration, formalism and the mechanics of de-representation. He has cut, branded, stitched, burned and hammered nails into his own body in a decades-long examination of identity and political conventions of the 20th century.

Disillusioned with performance art and its photographic representation, Parr began to make large charcoal drawings of himself in the 1980s. In 1987, he began collaborating with the printer John Loane, and over the next 13 years, they produced over 1000 prints mostly in etching, drypoint and aquatint. In 1990, the National Gallery of Australia mounted an exhibition of his prints as a work in progress, and in 2006, the Museum of Contemporary Art, Sydney held a retrospective of his prints, which included videos of his earlier performances.

Parr has been exhibiting since 1970 in Australia and overseas. He represented Australia at the Venice Biennale in 1980 and was invited by curator Anthony Bond to return to the Biennale with an installation in 2015, The Ghost Who Talks, Palazzo Mora, Venice. He was included in the Sydney Biennale (2016, 2008, 2000, 1992, 1981); Moscow Biennale (2009); Fukui Biennale (2001, 1997); and Havana Biennale, Cuba (2000). His performance practice was the focus of the retrospective Edelweiss, Kunsthalle Wien, Vienna in 2012 and, in 2016, a survey show, Mike Parr: Foreign Looking, was staged at the National Gallery of Australia. Later that year he performed Entry by Mirror Only at the DARK MOFO festival, in which he stayed in a manhole beneath the streets of Hobart for 72 hours.

A celebrated artist throughout his career, Parr won the Sponsor’s Prize at the Sapporo 4th International Print Biennale in 1998, and the 1998 Lowenstein Sharp Arts 21 Fellowship Awards in 1998. In recent years, Parr has returned to extreme performance to highlight the plight of asylum seekers held in detention centres by the Australian government. Parr’s work is held in every state and national collection in Australia, as well as important regional, corporate, university and private collections in Australia and overseas.