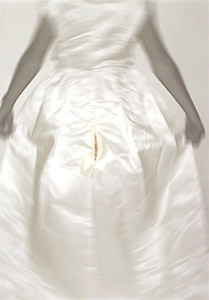 ☆ Add to wishlist
‘I have long been interested in psychoanalysis and have been intrigued also by strategies used by some Surrealists. If I add these influences to my own life experience I come as close as I can to providing a rationale for my images of fantasy.’ (Pat Brassington, quoted in Anne Marsh, Pat Brassington, Quintus, Hobart, 2006, p. 6.)

At forty-one, Pat Brassington was a relative latecomer to the arts when she studied her Master of Fine Arts in 1985 at the Tasmanian School of Art, University of Tasmania. Since then, she has produced surreal, subversive works that are rich for psychoanalysis, often with a feminist disposition, including in her “pink images” that aim to challenge the stereotypes associated with that colour and with femininity generally. She has exhibited for over three decades, producing a vast body of work that includes photography, printmaking and sculptural installations.

An early adopter of digital technology, Brassington’s use of digital manipulation allows her prints to achieve the effects of collage and photomontage without the physical traces of the original images. This further separates her from the early modernist use of collage, though with the latter there is a shared interest in producing truly dream-like images.

In 2017-18, the Art Gallery of New South Wales staged Pat Brassington: The Body Electric, a show about Brassington’s interrogation and exalting of the body, the title aptly taken from the poetry of Walt Whitman. In 2013, Brassington was awarded the Monash Gallery of Art Bowness Photography Prize. A major survey of her work, A Rebours, was held at the Australian Centre for Contemporary Art, Melbourne, in 2012, which toured in 2013 to the Australian Centre of Photography, Sydney, and to New Zealand in 2014 thereafter.