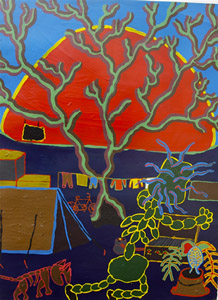 ☆ Add to wishlist
Harry J. Wedge painted forthright images of his experiences of life at Erambie mission, Cowra, in the heart of Wiradjuri country. He studied photography and then painting at Eora TAFE in Sydney's Redfern in the late 1980s, soon finding that painting in acrylic was a better-suited means of expression.

Wedge was part of the Sydney art collective, Boomalli and worked with artists Ian Abdulla and Elaine Russell who also painted their experiences of growing up on missions.

Wedge was included in 'Australian Perspecta' at the Art Gallery of New South Wales in 1993 and in the same year held a residency at the gallery where he produced the work 'Stop and think', 1993.

Other important exhibitions for the artist include the Boomalli touring exhibition 'True Colours: Aboriginal and Torres Strait Islander Artists Raise the Flag', 1994 curated by Hetti Perkins and Brenda L. Croft. Wedge's major triptych 'Taken over the environment', 2002 was exhibited in the Biennale of Sydney in 2002.