All of the mesmerising elements of Bill Henson’s practice are present in this portrait of two seated youths, where a collection of delicately folded limbs are directed in and out of darkness by the artist’s studio lighting.

A simple black dress is used powerfully in composition. It pins Henson’s two sitters to centre, so that when the girl’s limbs sprawl out from her clothing, and the lithe line of her companion’s neck meets the arch of his shoulder, they glow blue-white against the darkness that envelops their tandem form. Four hands, one foot, and two faces are linked together by velvety chiaroscuro and the sense of high Romance it conjures.

The flushes of pink, and tracery of veins beneath skin, beneath bruising and grime that has come to be seen as Henson’s signature skin-tone, feature beautifully here, recalling John McDonald’s words on the series,

‘The bodies of teenagers are transformed into living sculptures, infused with a slivery-blue sheen, every bruise and blemish captured in unsettling detail…

Henson's images are testimonies to that quality Nietzsche calls the "great intelligence" of the body. In simple, mute images, unencumbered with pseudo-intellectual claptrap, they show us bodies that effortlessly conjure up thoughts of the soul and the self.’ (Sydney Morning Herald, April 9 2011)
http://www.smh.com.au/entertainment/art-and-design/bill-henson-20110408-1d6gy.html) 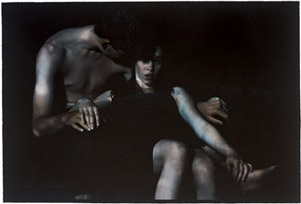