Exhibited
Another from the edition was exhibited in
'The unquiet landscapes of Rosemary Laing', Museum of Contemporary Art, Sydney, 23 March-5 June 2005

Famously steeped in political disillusionment, this is a brilliant image from 'bulletproof glass' (2002): the sister series to Rosemary Laing’s 'flight research' (1999).

Laing’s bride flails theatrically, marked by a bullet wound to the chest; where once she soared in free-flight, apparently liberated from the effects of gravity and the weight of the world below. Pigeons join her now-sideways descent, obscuring her face with their violent flapping. The sun from a brilliant sky shines on her exposed, stocking-feet.

If, as Solomon-Godeau remarks, Laing’s bride in 'flight research' was ‘suffused with the exhilaration of heightened hope and renewal’ in the midst of 99’s Public Referendum Debates – this counter move, to ‘choreograph her assassination’ three years later, must be seen as an expression of reality biting: an ode to ‘the dashed hopes and heightened expectations of previous years.’ (Solomon-Godeau, Abigail, 'Rosemary Laing', Piper Press, 2012, pgs 30-31) 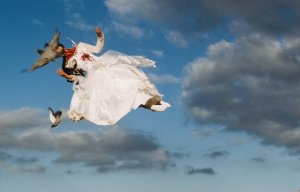