Russell Drysdale was a sometimes reluctant and recalcitrant artist, who carried a weight of responsibility about his creative contribution to culture and what his legacy to art would be. While an incredibly slow painter, he was a more prolific draughtsman, and used drawing as the basis for all his work. In turn, it was his works on paper that became the backbone to many of his acclaimed exhibitions. Novelist Murray Bail describes what he feels is a 'steadiness' in Drysdale's drawings, as opposed to the tragic overtones of his paintings.'The Greek' perfectly captures this apparent freedom that Drysdale permitted himself when he turned to his practice on paper. This ink and wash drawing almost sighs with a humble ease.

'The Greek' is a quick, brilliantly observed sketch of a character encountered by the artist on his travels through remote parts of Australia. And yet interestingly, it is perhaps not a single portrait of one merchant or store keeper, but rather a representation conjured by Drysdale from numerous engagements with people in the community. Since Drysdale's pictures were always composed in his studio, he rarely modelled his work on a single person or place, but rather sought to remember and re-imagine these encounters. 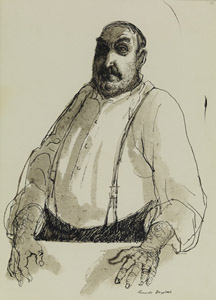 ☆ Add to wishlist
Bio to come