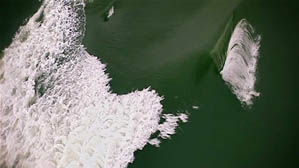 ☆ Add to wishlist
New Zealand-born Australian artist Daniel Crooks is a leading video artist and is an important pioneer and innovator in the medium globally. Born in Hastings, New Zealand in 1973, Crooks graduated from the Auckland Institute of Technology before moving to Australia to undertake postgraduate study at the Victorian College of the Arts, Melbourne. He currently lives and works in Melbourne.

Crooks began his Time Slice project in 1999. It is the banner under which all of his digital imagery is made and it has introduced a unique element to contemporary video art. Through this ongoing project, Crooks has sought to give audiences a new way of looking at the world and a new, more tangible experience of the phenomenon of time. His videos and still images have aimed to give time physical appearance, weight and presence in motion, with his approach to video art in particular, and its relatively new place in global art practice at the time, being ground-breaking in its perfectionism and simplicity. In describing his intentions with the series, Crooks wrote in his artist statement: "Thin slices are extracted from a moving image stream and then recombined using temporal and spatial displacement...Though inherently digital, the images have the most beautifully organic qualities: images that are at once aesthetically and intellectually intriguing."