to be sold with artist book, 'Polly don’t want no Cracker neither'
artist book
16 x 21.7 cm 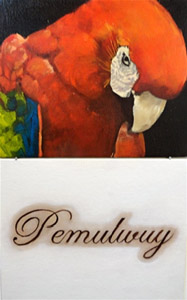