The performers in this work are Taka, Yuya, Ai, Kio Videography by Gotaro Uematsu Commissioned by Tokyo Wonder Site, Japan 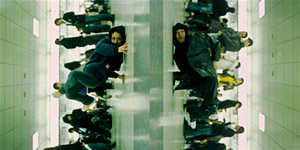