The work of John Olsen requires little introduction, as it seems to already occupy a significant place in the Australian consciousness. The artist has spent a lifetime in unwavering pursuit of his own unique vision of the Australian landscape. In Olsen’s work there is no foreground, middle ground and background schema, nor any concern with “human scale.” Instead he employs simultaneously the contrary vantages of the naturalist and the geographer or, to put it another way, the viewpoints of the frog and the eagle.

'Early Morning Frog Movements' is a sublime example of a significant strand of Olsen's practice, in which he pulls focus on the complex inhabitants of the wetlands and the microscopic ecological drama that unfolds just beneath the surface. Acknowledged as a master watercolorist, Olsen's paintings are marked by joyous colours and energetic lines. In 'Early Morning Frog Movements', his characteristically quizzical line and irregular squiggles and dots deftly render countless organisms, large and minute. It is Olsen's signature blend of line, colour and form that envelops the viewer through its swirling perspective.

In an era of abstraction and postmodernism, Olsen has rigorously stuck to nature as his subject. Even when he is referring to the outback landscape, usually noted for its austerity and inhospitality, Olsen’s imagery teems with life. Plants, birds - and in particular, frogs - began to feature in his works during the 1970s and 80s when he travelled extensively across the country, giving new insights into Australia's regional and desert landscapes. The artist became fascinated by the torrential weather patterns which see environments barren at one moment, and bursting with life the next. Frogs appear from the underground, and fish start to swim. 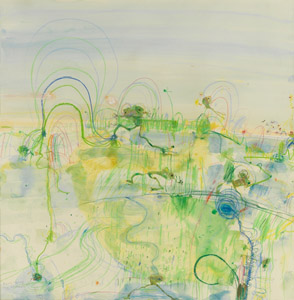 Image courtesy of Tim Olsen Gallery and the artist

☆ Add to wishlist
John Olsen is a giant in the Australian art world, arguably one of the country's most celebrated and financially successful living artists. He has a roll call of accolades including an O.B.E. award for services to the Arts in 1997 and an Order of Australia in 2001. In 1991 Olsen was the subject of a major retrospective at the National Gallery of Victoria, and in 1993 was awarded an Australian Creative Fellowship. Following early wins of the prestigious Wynne Prize in 1969 and 1985, he took out the Archibald Prize in 2005 with his intriguing self-portrait 'Janus Faced'.

While Olsen's brilliant career puts him in the spotlight, his practice is marked by a quiet, deep engagement with the Australian landscape. He has lived for long periods of time in different parts of the country, and - despite deeply transformative experiences encountering European art abroad - has always chosen to live in Australia. He is perhaps best known for his much loved depictions of frogs, birds, plants, and animals observed in Australian outback locations such as Coopers Creek, Kakadu and Lake Eyre.

Born in Newcastle in 1928, Olsen began his career as a freelance cartoonist for magazines, developing the quizzical style of drawing which is perhaps still evident in his idiosyncratic linework. In 1950 he attended the Julian Ashton Art School and by 1955 staged his first major exhibition at Macquarie Galleries Sydney. He has at times been mislabeled an abstract artist, which Olsen counters: "I have never painted an abstract painting in my life". Instead, he describes his work as "an exploration of the totality of landscape," whereby shifting the viewpoint from the ground level to an aerial perspective creates a unique horizonless landscape. He says: "A Chinese mandarin once said that the way to get nature in its proper detail is to see it from the air. Australia is so vast and big it's the only way to see it".