The transience of cherry blossoms is taken in Japanese culture as a joyous visual expression of the Buddhist understanding that all things pass. Like dual sides of a coin, their revered beauty and quick death represent for Norrie a link to two of her enduring subjects - feminism and mortality.
This image may reprise the artist's haunting installation 'Undertow' (Art Gallery of New South Wales collection, 2002) where a young girl is carried through a cherry blossom festival in Tokyo.

The process in Norrie’s recent works, involves the use of a photographic image applied with black paint through the screenprinting process. This medium gives the work a flat image, which Norrie has elevated in a mixture of delicate hand brushwork and rivulets of molasses texture that both seduce and repel. 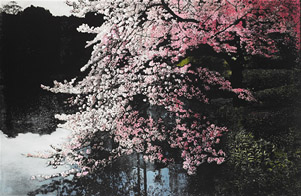