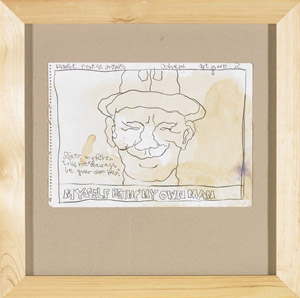 ☆ Add to wishlist
Robert MacPherson's paintings, sculptures and installations can be seen as lively investigations into the language of Modernism. Incorporating the styles and motifs of roadsign signage, slang expressions and hand painted shop placards, MacPherson's work is often created using the humblest of materials, such as paint-brushes, pots, socks, shovels and blankets. Through these modest domestic materials, MacPherson creates works that are strikingly beautiful, humorous and decisively Australian: works that highlight the poetry of the everyday.

Born in Queensland in 1937, MacPherson worked as a ship painted in the 1960s before travelling extensively throughout Europe and the US during the 1970s, where he took in the history of modern art and began assimilating that knowledge into his own work. Interested in the environment and farming, his works frequently reference elements of nature and working the land in a variety of ways, from portraits of drovers and cattlemen through to large-scale text paintings and installations that reference agricultural work.

MacPherson's work has been the subject of several survey exhibitions, including his first in 1995 at the National Gallery of Victoria, Melbourne; and, in 2001, a major survey at the Museum of Contemporary Art, Sydney and Art Gallery of Western Australia, Perth. In 2018-19, the Queensland Art Gallery, Brisbane, exhibited BOSS DROVERS (1996-2014), an immense work of 2400 drawings all executed in the name of his alter ego, a Year 4 student named Robert Pene, with each work dated 14 February 1947 and stained to add to the illusion.