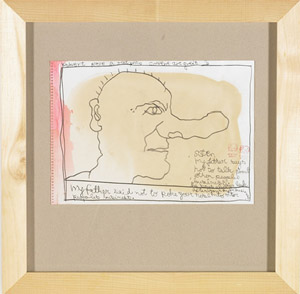 ☆ Add to wishlist
Born in Queensland in 1937, Robert MacPherson is one of Australia's most important living conceptual artists. MacPherson's paintings, sculptures and installations can be seen as lively investigations into the language of Modernism.

Incorporating the styles and motifs of roadsign signage, slang expressions and hand painted shop placards, MacPherson's work is often created using the humblest of materials, such as paint-brushes, pots, socks, shovels and blankets. Through these modest domestic materials, MacPherson creates works that are strikingly beautiful, humorous and decisively Australian: works that highlight the poetry of the everyday. Represented by Yuill Crowley, Sydney, MacPherson's work has been the subject of two survey exhibitions - the first in 1995 at the National Gallery of Victoria, Melbourne and the second held at the Museum of Contemporary Art, Sydney and Art Gallery of Western Australia, Perth in 2001. He has been regularly included in museum exhibitions, including the Biennale of Sydney in 1990, 1998, 2000 and 2002.