Exhibited
Another from the edition was exhibited in
'The unquiet landscapes of Rosemary Laing', Museum of Contemporary Art, Sydney, 23 March-5 June 2005

Staggering in its beauty and strangeness, this photograph is part of Rosemary Laing's seminal 'flight research' series completed between 1998-2000. In it, an airborne bride is cast against a brilliant sky, paradoxically seeming to be both in motion and eerily still. The astonishing image seems to make possible the impossibility of human flight, not through digital manipulation but rather an elaborate physical intervention in the landscape. The hyper-real tableau was constructed by directing and documenting a powerful stuntwoman - costumed in an old-fashioned wedding dress - being projected through space.

Laing's famously ambitious photographic practice commemorates these site-specific interventions undertaken throughout Australia. In 'flight research #3', Laing literally turns the idea of landscape portraiture on its head. Here, the traditional figure-in-the-landscape is not in the landscape at all, but rather diving into it. The image captures the joyous feeling of being unhindered by gravity and, created in 1999 on the eve of the new millennium, also embodies Laing's optimism for the new era. A later series of work titled 'bulletproofglass' would cast a bloodied bride against darker, more ominous skies.

The artist's fascination with flight began in 1994 when she moved into a studio in Sydney's Leichhardt, directly under the flight path. She became seduced by the idea of aeronautical engineering and later undertook a period of research at NASA to explore the machinations of space travel. Rosemary Laing's art practice literary grew wings as it came to visually depict the sensation, mystery and mechanics of flight. 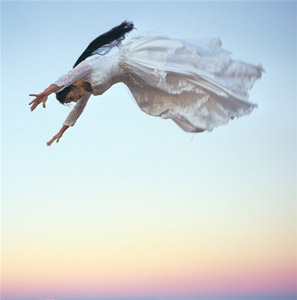