This electric photograph is from Tracey Moffatt's internationally renown 1989 series 'Something More'. The photographic suite includes nine images with their titles numbered like the chapters of an unfolding story. Or perhaps more appropriately, the frames of a film strip. 'Something More #1' is the first and most celebrated image in the series.

It is also the most visually dense, setting the dynamic opening scene for the implied narrative that follows: a young woman dreams of leaving her isolated home for the big city, but never makes it.

And yet, like history itself, Moffatt's photo-narratives are not so linear nor easily interpretable. The highly stylised tableaux of 'Something More' presents us with a diverse cast of characters which simultaneously flirt with and subvert stereotypical representations of race and gender. The story also remains enigmatic – the images are highly suggestive, but never make explicit the roles of the characters or precise nature of the drama. Moffatt herself likes to talk 'around' but never 'about' her work, believing that the theoretical texts which serve to discuss her art tend to ‘breathe life out of’ the actual experience of it. However certainly part of the artist's interest in photography and cinema is to dismantle the conventions of storytelling. In 'Something More #1' Moffatt does this formally by setting adrift this extraordinary image from the series, making it available to enjoy as its own intriguing micro-world. 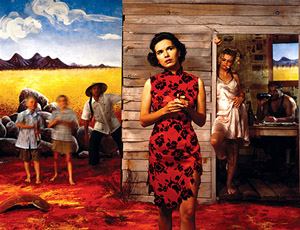