In this extraordinary painting, John Olsen offers us a rare glimpse of one of his most admired artists in one of his most treasured landscapes. 'Nolan at Broome' captures the iconic Australian artist sitting meditatively on Lord McAlpine's verandah at his home in Broome. Paradoxically, Olsen renders this quiet, simple scene in an electrifying dance of complex linework. The landscape is given Olsen's signature treatment whereby several vantages are collapsed together, creating the effect of being viewed from both above and within. The artist also imbues the environment with a fascinating psychological force, as if the inner-workings of Sidney Nolan's mind have been splayed across the canvas.

It is thought that Olsen and Nolan likely crossed paths in Broome in 1989 when they each had major exhibitions in Western Australia. Painting the portraits of artists he admires has been an important strand of Olsen's practice, and one that serves to pay homage to artists he considers as forbearers in the tradition to which he aspires. Nolan joins Australian artists such as Lloyd Rees, Ian Fairweather and John Passmore as the subject of Olsen's portraits, as well as a wider circle of international influence including Rothko, Degas and Renoir. Monumental in scale, this oil on canvas also serves as a moving memorial to Sidney Nolan. Olsen completed the work the year that Nolan passed away. 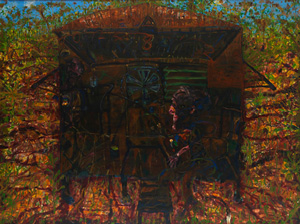 Image courtesy of Tim Olsen Gallery, Sydney and the artist

☆ Add to wishlist
John Olsen is a giant in the Australian art world, arguably one of the country's most celebrated and financially successful living artists. He has a roll call of accolades including an O.B.E. award for services to the Arts in 1997 and an Order of Australia in 2001. In 1991 Olsen was the subject of a major retrospective at the National Gallery of Victoria, and in 1993 was awarded an Australian Creative Fellowship. Following early wins of the prestigious Wynne Prize in 1969 and 1985, he took out the Archibald Prize in 2005 with his intriguing self-portrait 'Janus Faced'.

While Olsen's brilliant career puts him in the spotlight, his practice is marked by a quiet, deep engagement with the Australian landscape. He has lived for long periods of time in different parts of the country, and - despite deeply transformative experiences encountering European art abroad - has always chosen to live in Australia. He is perhaps best known for his much loved depictions of frogs, birds, plants, and animals observed in Australian outback locations such as Coopers Creek, Kakadu and Lake Eyre.

Born in Newcastle in 1928, Olsen began his career as a freelance cartoonist for magazines, developing the quizzical style of drawing which is perhaps still evident in his idiosyncratic linework. In 1950 he attended the Julian Ashton Art School and by 1955 staged his first major exhibition at Macquarie Galleries Sydney. He has at times been mislabeled an abstract artist, which Olsen counters: "I have never painted an abstract painting in my life". Instead, he describes his work as "an exploration of the totality of landscape," whereby shifting the viewpoint from the ground level to an aerial perspective creates a unique horizonless landscape. He says: "A Chinese mandarin once said that the way to get nature in its proper detail is to see it from the air. Australia is so vast and big it's the only way to see it".