In 1990 Bill Henson was invited by the Paris Opera to produce a body of work as part of their ongoing program of collaborations with visual artists. The project took Henson to Paris several times over the year, where he visited the three great Parisian Opera Houses to photograph the audiences attending performances.

A series of photographic sketches made in Paris were bought back to Henson’s Melbourne studio, where he restaged and directed this greatly collected and loved series of tableaux, to give them less of a documentary sense, but allowing the images to be ‘an event in their own right’.

Henson’s treatment of the subject – his figures gathered shoulder to shoulder in the dark, waiting for a special event – is so finely evocative, Gael Newton was moved to write ‘his figures are passive but, in losing themselves, seem to live more intensely.’

Undeniably the spirit of this subject elicits something quite resonant in Henson’s practice. His lighting responds closely to the chiaroscuro of the sixteenth century European masters, with a highlight on a nose or a collar appearing as though directly from a Rembrandt portrait. The French painters, with whom Henson so often blends his palate and inky rich tones, are easily accessible in this world of the Paris Opera.

This edition of this work was that which hung in the exhibition 'Bill Henson, 3 Decades of Photography', Art Gallery of New South Wales, Sydney and National Gallery of Victoria, Melbourne in 2005 and was described by the Art Gallery of New South Wales on the occasion of Henson’s major 2005 Retrospective as ‘the series which seemed to literalise the effect of listening to music, to find formal expression for emotions generated by music.’ 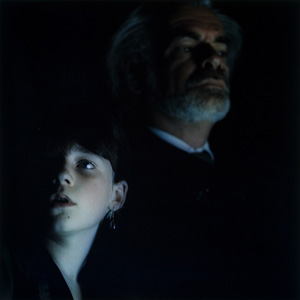