A study for Amor indicates a half-size canvas – a smaller work of no less stilling and totemic presence. In this ‘Study for Boy looking at a Ship’, a lone boy runs along a wharf. The monumental figure of a ship rises up before him – as ominous as the sea and sky from which it materialises. There is a wildness about the scene and its landscape that cannot be separated from the feelings it provokes.

The beautifully calibrated scale of this image – the smallness of the boy and vast horizon – seems to translate a poignant remembrance of the vivid experiences of youth and their force of presence later in life.

‘Amor imagines his subjects like dream narratives and seeks to preserves the mobile and disembodied quality of memory.’ (Christopher Allen, 2009) 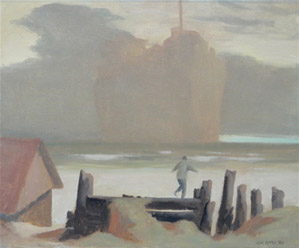 ☆ Add to wishlist
Rick Amor is inspired by dreams and memories, seeking out a mix of subconscious and observed subjects from plein air studies to populate his paintings. These elements are “all assembled to reinvent my memory”, he says, to produce works that fall partway between a realist and surrealist depiction of suburban life.

Born in 1948, Amor recalls his childhood in Frankston, Victoria – a small beachside town at the end of the railway line: ‘There were always things washed up, strange objects. People drowning and storms blowing up. The weather in my paintings comes from those early experiences. I still dream about them.' (Josephine Rowe, “Rick Amor is a painter”, Dumbo Feather, no. 32, 1 July 2012.) He trained at the Caulfield Institute of Technology, Melbourne, from 1965, and then the National Gallery School from 1966 to 1968, where he learned painting under John Brack alongside fellow artist Jeffrey Bren.

Amor credits Joan Miro, as well as Brack, as key influences in his early paintings, which featured strong outlines and bright colours in works that were almost Cubist. But, especially from the 1980s, Amor’s work became more consistently embedded in natural and urban landscapes that call to mind artists as disparate as Gustave Courbet, Edward Hopper, Jeffrey Smart or Giorgio de Chirico. In his paintings, as well as in his drawings and prints, there are figures or landscapes in motion, yet there is always a countervailing sense of stillness, as if each image is a snapshot from the artist’s memory rather than a faithful depiction of reality.

Amor has exhibited since 1974 and has received a number of major exhibitions and surveys in Australian public institutions, including Rick Amor: Contemporary Romantic, Art Gallery of South Australia, Adelaide (2017); Rick Amor: 21 Portraits, National Portrait Gallery, Canberra (2014). In 1999 Amor was appointed Australia’s Official War Artist to East Timor, the first war artist since the Vietnam War. The major survey Rick Amor: A Single Mind was presented at the Heide Museum of Modern Art, Melbourne in 2008 looking at paintings and drawings dating from 1966.