Surely not, for little did he think little could come of it. The problem was little was the means method and outcome., 2006
varnish on canvas
200.0 x 260.0 cm

This is a commanding painting: physically large and immersive in its depth beyond the surface. Frank’s surfaces are true objects of fetish, impossibly luscious molasses creations of dyed varnish, oxide and chemical reaction – sulfur and phosphorous amongst others are used, but the exact recipe is a well-kept secret. A viewer will find themselves mirrored in this infinite gloss, bulging outward and upward with each rivulet and mutation of colour.

The title, plucked from obscurity ‘Surely not, for little did he think could come of it. The problem was little was the means method and outcome’ wends its own way about the painting, recalling the wise-guy-speak of a 1950s mobster. Charmingly it leads the viewer further down the rabbit hole.

Painting for Frank is a performative act of endurance. It can take up to eight hours for a single movement of varnish over canvas to unfold as the artist intends. A prostrated canvas is raised and tilted from below, with Frank responding at each second to the creative process. As noted by Christopher Chapman, Frank ‘relates conceptually to synaptic, molecular and libidinal energies and electrical flows.’

‘Frank foregrounds the physical and psychological experiences of his creation of the works and our experience of them. For Frank the act of painting not only produces a static two-dimensional image, but also is an idea bound up with performance and time. These paintings suggest worlds that might be cosmic or quantum in scale, delirious and spectacular in their internal colour and form relations… they appear animate, full of pulsing sensation and rippling spatiality.’ (Christopher Chapman, ‘So far: the art of Dale Frank 2005-1980’, Schwartz City, 2007) 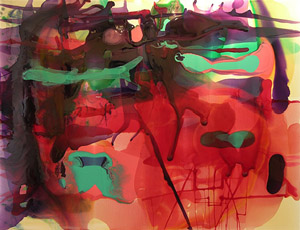