Shaun Gladwell's 'Storm Sequence' (2000) is a photographic still from his video of the same name. Arguably the most iconic of the artist's single-channel video works, it marks a key moment in Gladwell's exploration of the relationship between the body, space and time. The slow-motion video shows the artist moving deftly on his skateboard against a stormy oceanfront at Bondi Beach.

This intimate photograph captures the figure in mid-flight, as he gracefully pirouettes on his board. The setting deliberately evokes a sense of the sublime, with white-capped waves and a brooding sky forming a backdrop to the action. Gladwell often sites the history of painting as his most important influence and here the artist references the tradition of romanticism, and in particular, the stormy seascapes of J.M.W. Turner. The flecks of rain on the surface of the image remind us of the work's photomedia origins, and yet Gladwell's unique treatment of the media is also suggestive of a pointillist, impressionist painting. Featuring the artist himself, this photograph is both a dramatic portrait of the Australian landscape and a dynamic self-portrait of the artist. 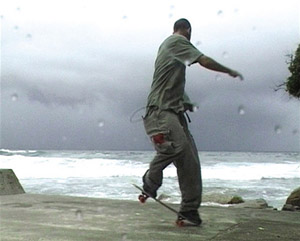