Provenance
Richard King Gallery, Sydney
Acquired from the above by the present owner in 1991

The iconic 'Bondi' image captures the view of the sunbaker. Dupain shot 'Bondi' from ground level providing a tilted view of the common beach scene.

This voyeuristic image captures a woman from behind at the moment she self-consciously adjusts her swimsuit. The feminine gesture of her hands and the soft lines of her body are contrasted by the masculine pose of her partner, standing with sharp, angular arms on his hips. 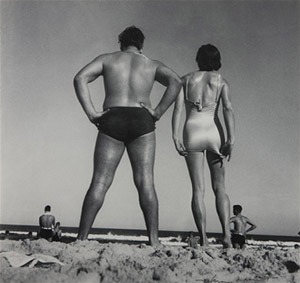