Provenance
Richard King Gallery, Sydney
Acquired from the above by the present owner in 1991

There is a strong sense of masculinity found in many of Dupain’s beach works. In 'At Newport' this is emphasised by the strong, angular lines of the figures, an image that seems to capture the essence of male youth at the beach. In this image, three male swimmers are positioned in the foreground of a beachside pool setting. The long shadows of the late summer sun place further emphasis on the angularity and thus the masculinity that is a feature of this image. 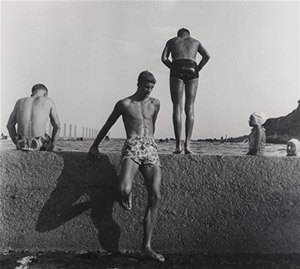