It was in 1978 that Brett Whiteley was the first artist to ever win the Australian art world trifecta - the Archibald, Wynne and Sulman in the one year. It was also the year that he painted one of his first depictions of Bondi. Whiteley was often seen down at Bondi, taking a dip, socialising and enjoying the natural beauty of this amazing coastline.

Interestingly it was suburban Bondi Whiteley chose to depict, with its apartment density and mass of roofs inferred by blocks of orange and red overlooking the grey sea and sky, without a horizon. Borrowing from French artist Nicholas de Stael the thick square brush application of paint harked back to his abstract paintings of the 1960s, with the iconic blue palm trees poking through.

As seen in many of Whiteley's Lavender Bay paintings, there is a quiet sense of tranquility in this work, as if the suburbs represented a sanctuary for the artist, a place that allowed him a secluded withdrawal from society.

During the 1980s, Whiteley focussed solely on the urban coastal landscape and Bondi became a primary location. He encapsulated visions of beach culture with studies, etchings and paintings of vistas, panoramas and most famously the sunbathers of Bondi Beach. Always seduced by place, he enriched his landscapes with a distinct sensuality and beauty. 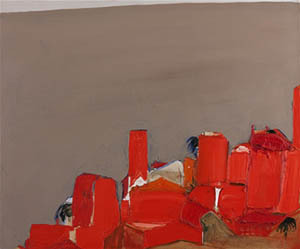 Courtesy of the Whiteley estate

☆ Add to wishlist
There is perhaps no Australian artist who attracted as much fame, controversy and interest in their lifetime as Brett Whiteley. Described by the director of London's Whitechapel Gallery as "the Shirley Temple disguised as Holden Caulfield of modern painting", Whiteley's paintings from his home and studio in Lavender Bay have become the definitive representations of Sydney Harbour. The only artist to win the triple crown of the Archibald, Wynne and Sulman Prizes in the same year (1978), Whiteley was as acclaimed by the art world as he was by the viewing public.

Born in Sydney in 1939, Whiteley worked in the art department of an advertising agency and painted on weekends out in the country, including with friend and fellow artist Michael Johnson. In 1959, he won a travelling art scholarship judged by Russell Drysdale and travelled to Europe in 1960. The following year, aged 22, he became the youngest artist ever acquired by the Tate, London - a record that stands even to this day.

After moving between abstraction and representation in his early years, Whiteley committed fully to abstraction with series depicting the infamous serial killer John Christie and his victims, animals at London Zoo, and female bathers. He won a Harkness Fellowship in 1967 which took him and his wife, Wendy Whiteley, and daughter, Arkie, to New York where he lived at the Hotel Chelsea alongside Bob Dylan and Janis Joplin. In response to the Vietnam War, he completed his largest work, The American dream, but his representative gallery refused to show it. In response, he went to Fiji, where he was deported on drug possession charges.

On arriving in Australia, the Whiteleys eventually settled in Lavender Bay, which Whiteley depicted in the manner of Matisse's studio paintings. From 1976 to 1978 he won the Wynne, Sulman and Archibald Prizes twice each, winning the Wynne again in 1984. He was the subject of a television documentary, Difficult Pleasure, in 1989 and has been the subject of several monographs, films and an opera since then.