Provenance
Richard King Gallery, Sydney
Acquired from the above by the present owner 1991

Exhibited
This actual photograph was exhibited in the touring exhibition Federation, curated by National Gallery of Australia.

'Sunbaker' is undoubtedly the most famous photograph made in Australia. The beauty of this image lies in its' simplicity in creating a powerful and mysterious image of the human form, as well as a symbol for the freedom of lifestyle found in Australia itself. At the end of a period of post-depression when Dupain made some of the most beautiful and cutting-edge images of the female nude, this image of the Sunbaker captures the turning of Australian morale from the depression era.

Dupain was 26 years old when fellow-photographer Olive Cotton (his first wife); friend Englishman Harold Savage and his wife all went on a holiday to Culburra Beach, south of Sydney. Dupain who always travelled with his camera, captured the moment of his very fit friend Savage flopping onto the beach after a swim. Sunbaker features the head and shoulders of this bronzed, male figure basking in the warming rays of the summer sun. Taken from a low angle, the figure appears to be embracing the land beneath, an acknowledgement by Dupain of our collective connection with the Australian landscape.

Although taken in 1937, Sunbaker stayed hidden in Dupains' library of works, making it's first significant appearance when it was used for the catalogue cover of the first Dupain survey exhibition held at the Australian Centre for Photography, in Sydney in 1975. Since then it has often been drawn upon to represent our sunburnt country, in particular, Qantas used it in one of their advertising campaigns. 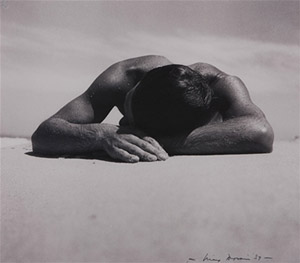