one dozen unnatural disasters in the australian landscape #2 , 2003
Type C photograph, number 9 from an edition of 12
60.0 x 112.0 cm
signed, dated, numbered and inscribed with title (on the reverse)

This sensational drama-filled photograph is part of Rosemary Laing's 2003 series 'one dozen unnatural disasters in the australian landscape'. In this acclaimed suite of photographs, Laing introduces elaborate man-made installations into the sparsely inhabited natural landscapes of the North-East regions of Western Australia. This area is home to the county's largest concentration of Indigenous Australians.

In 'one dozen unnatural disasters in the australian landscape #2', black smoke billows violently from a flaming car wreck, enveloping the surrounding land. There is a disturbing disjuncture between the explosive automobile and the quiet desert landscape, creating a critical commentary on the invasive activity of colonization.

Laing's staged interventions in the landscape have become increasingly ambitious over the years and involve extensive planning and resources. Her approach is unique in its use of real-time events and physical installations, rather than effects achieved through digital manipulation. The artist staged and shot 'one dozen unnatural disasters in the australian landscape #2' on a roadside in the Tanami Desert. Working with a large crew of collaborators, the scale and process of Laing's undertakings can be compared to that of a film shoot. Furthermore, by recording the events in process, the images often resemble film stills, or what the artist refers to as "distillations of time". 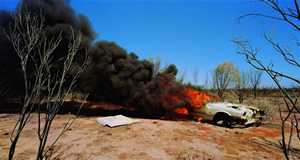