Provenance
Roslyn Oxley9 Gallery, Sydney
Acquired from the above 25 March 2000

From out of the rich darkness of this photograph comes the youthful face of a girl. Her skin illuminates the image and her lips vibrantly punctuate her expression. Gazing beyond the frame this girl appears to hover in the liminal zone between youth and adulthood, between the known and the unknown, and between past and future.

Henson's compelling photographic imagery speaks of time and journeys with a haunting stillness. This night portrait demonstrates Henson's adept knowledge of light for the production of images that are not like normal photographs, they are akin to a great master painting. 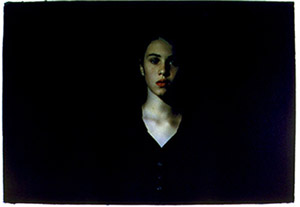