Provenance
The artist
Eight Bells Gallery, Gold Coast
Acquired from the above by the present owner circa 1972


Williams began the 'Upwey' series after he moved to the foothills of the Dandenong Ranges with his family in 1963. The series can be seen as a development from the 'You Yang', 'Yellow Landscape' and 'Hillside' works where he had already begun to demonstrate a new gestural freedom in his work.

'Upwey Landscape' is considered the pinnacle of Williams' landscapes; a language of 'dots and dashes' where individual trees and plants become an amalgamation of shapes and lines. There is an animated presence here where the foliage is lively and full of movement.

His house in Upwey was situated in a valley, with his studio view looking up which is demonstrated in this work by the characteristic narrow band of the sky. The vegetation in 'Upwey Landscape' is dense in the background and centre and fades towards the foreground. Williams would also tilt the picture frame to further this sense of perspective in an attempt to upturn the traditional manner of landscape painting.

'Upwey Landscape' was a result of a creative burst for Williams, where his own distinctive interpretation of the Australian landscape reached a pivotal point. The works from this series gained several major art prizes including the Georges Invitation Art Prize, the W.D and H.O Wills Prize and the Wynne Prize. 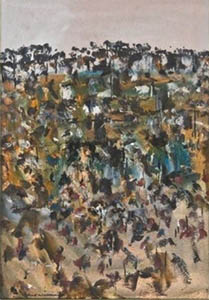 ☆ Add to wishlist
For the naturalistic tradition in Australian landscape painting, Fred Williams represents one of the most original forces of the 20th century. He is known for his images of dry environments such as Upwey and the You Yangs in Victoria and the Pilbara region of Western Australia, and is remembered as a painter of essence and character, as opposed to a painter of grand scenes. Williams was particularly fascinated by the flatness of the Australian continent and his landscape images often spread themselves out across the canvas, without horizon lines, like landscapes seen from the air.

Williams trained in Melbourne, at the National Gallery School and the George Bell Art School during the 1940s. In 1951 he left for London and, after further study returned to Australia in 1957. His breakthrough series of You Yangs paintings was exhibited in the early 1960s and began to transform the way Australians saw their native landscape.