Provenance
Macquarie Galleries, Sydney
Private collection
Barry Stern Gallery, Sydney
Acquired from the above by the present owner circa 1973

"Well, my real working used to be to carry around a small sketchbook and make studies from various things I saw, but in time I got interested only in a few subjects and I didn't want to go around looking for any more subjects. The problem was to do the one subject, and so it practically boiled down to that. By one subject I mean ... people." - Ian Fairweather 1965

At the age of 62 in 1953, Fairweather arrived back from his infamous Raft journey from Darwin to Bali, and decided to settle in a home-made thatched hut on Bribie Island just north of Brisbane in Queensland.

Although Fairweather is known for his reclusive existence on Bribie Island in the later years of his life, it is fascinating that he chose to focus primarily on the figure. Except for a few isolated periods in Fairweather's career, his attempts at abstraction were always met with an insistence on the figure, as he struggled at suppressing his English training.

Fairweathers' work was autobiographical and reflective. The subject of his paintings reflects the cities he had visited, the people, and occurrences in his life. But above all Fairweather's paintings are meditations upon these experiences. Fairweather believed that "Painting is a personal thing. It gives me the same kind of satisfaction that religion, I imagine, gives to some people".

'Figure Group' was created in the last few years of Fairweather's life and is a masterly depiction of four figures reduced to loose simple black lines, against a richly dappled background of colour and intense painting. Murray Bail compared the dappled pink to that seen in 'House by the Sea', 1967 and the purple to his masterwork 'Shalimar', c.1962 both held in the collection of the National Gallery of Australia. The composition of figures almost staring out at the viewer, was certainly the common thread in his later works, which Bail again suggested were the authoritarian figures that often confronted the artist at Bribie and in his travels.

When Fairweather's exhibition opened at the Macquarie Galleries in Sydney in late 1970, James Gleeson hailed his paintings as 'Master works by one of the most important painters of our time' 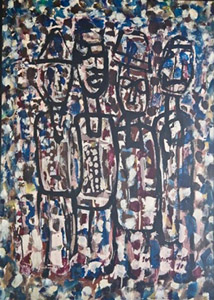