The Stairway from 'The Crossing', 1987
petit point with found frame
29.5 x 16.5 cm
signed, dated and inscribed with title (on the reverse)

In 1987, Narelle Jubelin and fellow-artist Adrienne Gaha held one of the most memorable exhibitions at First Draft, Sydney titled 'The Crossing'. What may have appeared simply as a group of works which studied the landscape in and around the Blue Mountains, (where Gaha lived and Jubelin visited), these images 'were informed by feminist and post-modern theory'.

'The Stairway' is a wonderfully detailed petit point embroidery of three figures walking in the Cathedral chamber of the Jenolan Caves in New South Wales. The artist remembers the work was drawn from a nineteenth century painting she saw in the Art Gallery of New South Wales. Surrounding the handwork by Jubelin is a 1920s Australiana pokerwork and stained frame she located in a Darlinghurst Antique shop.

As Wayne Tunnicliffe, Senior Curator, Contemporary Art, Art Gallery of New South Wales notes 'Her choice of a traditionally feminine and time-consuming craft to create small-scale images and her use of old, found frames carved by amateur woodworkers add a sense of vernacular history and suggest a valuing of the domestic and hobbyist over 'high art' traditions.' ('Art Gallery of New South Wales Contemporary Art Collection', 2006, p.176) 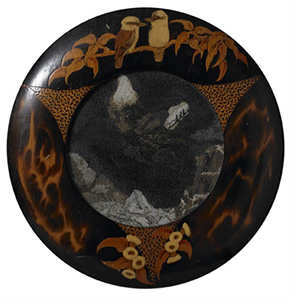