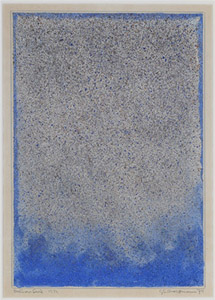 ☆ Add to wishlist
"At the time of his death in 2013, Gunter Christmann was gathering anew the type of critical and public attention that surrounded his striking debut as an artist in the 1960s. Painting for himself rather than the market throughout his long career, he moved easily between personal subjects and themes with universal qualities, finding a congenial truce between his European sensibility and an affection for the intimacies of his Sydney locale." (Lesley Harding, Gunter Christmann: Now and Then, Heide Museum of Modern Art, Melbourne, 2014.)

Born in 1936, Gunter Christmann came to Australia from his native Germany in 1959, trained briefly at the East Sydney Technical College in Darlinghurst and began to paint and exhibit shortly thereafter. Exhibiting in Sydney at Central Street, Coventry Gallery, Yuill Crowley and Roslyn Oxley9 Gallery from the 1960s to 1990s, Christmann alternated between abstract and figurative modes of painting throughout his career, uniting themes and features within his work are observation of the world around him, sensually painted surfaces and compositions with an instinct for colour and form.

From the 1970s, like other modernist artists of his generation like Frank Hinder, Christmann became interested in kinetic and sound sculptures, including photographic slide carousels, and even video works later in his career. After a final body of paintings produced in the last decade of his life, Christmann died in 2013, aged 77.

A major posthumous retrospective Gunter Christmann: Now and Then was mounted by the Heide Museum of Modern Art, Melbourne, 2014. It surveyed Christmann's fifty year career, presenting his geometric and constructivist abstracts, splatter and shuffle box paintings, figure studies, silhouette paintings and landscapes. Christmann was included in historic exhibitions such as the 1st Biennale of Sydney, 1982; the XI Biennale of Sao Paulo, Brazil, 1971; and, The Field, the inaugural exhibition of the National Gallery of Victoria, Melbourne, 1968.