Paddy Bedford was a senior Gija lawman born at Bedford Downs Station in the East Kimberly region. Like many indigenous artists, he lived a long life as a stockman before he looked upon the Turkey Creek elders - Rover Thomas and Paddy Jiminji - to begin painting. Bedford's first works were made with the inception of the Jirrawun Aboriginal Art Cooperative in 1997.

The distinctive minimalist style of his work is but a mask to the multifarious layers of meaning. Bedford's paintings are inspired by the distinctive landscape and stories of his country in the East Kimberly region of Western Australia, as he depicts from an aerial perspective the traditional dreamings of the Cockatoo, Emu and Turkey; the massacres of local Aboriginal people during the colonial period; as well as episodes from his own life as a stockman and as a senior elder of his community.

'Merrmerrji- Queensland Creek', 2005 is characteristically sparse in composition with bold forms, a rhythmic application of dotted fluid lines and a powerfully imposing colour palate, which is gained from a wet-on-wet mixture of white and ochre pigments suspended in a fast drying acrylic medium. The effect is a pearly radiant luminosity, an ambience of the sacred.

Bedford was one of the eight Australian artists commissioned to make a work for the Musee du Quai Branly in Paris. A major retrospective exhibition of Paddy Bedford's work was held at the Museum of Contemporary Art in 2006, recognizing this artist as one of the great masters of contemporary indigenous art. Late 2009 to mid 2010, his work was included in 'Contemporary Aboriginal Painting from Australia', Metropolitan Museum of Art, New York this year. 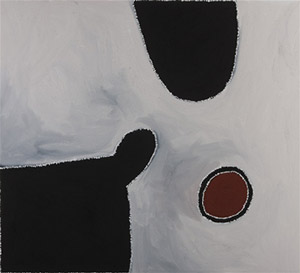 ☆ Add to wishlist
Paddy Bedford was born circa 1922 at Bedford Downs Station in the East Kimberley region of Western Australia. He died in 2007. Bedford worked for most of his life as a stockman and road builder while maintaining an active practice in traditional Gija law and ceremony. With the formation of the Jirrawun Aboriginal Art group in 1998, Bedford first exhibited at Rugun (Crocodile Hole). Initiated by the artist Freddie Timms, Jirrawun combined a legal constitution and philosophy allowing a dialogue between Gija and gardiya (whitefellas). The aim was to support and nurture Gija culture through both economic independence and cultural entrepreneurship instead of receiving government funding.

The 'East Kimberley' or 'Turkey Creek' style of painting is Bedford's heritage. His work recalls the strong lines and rounded forms of artists such as Queenie McKenzie and Jack Britten as well as the minimalist styles of Rover Thomas and Paddy Jaminji.

Bedford's paintings are steeped in narrative and history, layered with stories of time, place and dreaming. The complexity of Bedford's stories, in their unique combination of contemporary existence and ancient belief systems, is presented in simplistic and bold canvases. Bright colours and strong forms become bolder and warmer in his later canvases, where a shift from an opaque flat surface to a more fluid and smooth canvas is evident. The dual nature of positive and negative space in his works adds to the powerful emanation of something hard and soft; strong and delicate; masculine and feminine.