Enola, 2004
DVD and 4 chairs installation
each signed and dated by the artist, number 1 from an edition of 6

Provenance
Mori Gallery, Sydney
Acquired from the above

Exhibited
other examples from this edition have been exhibited at:
'On Reason and Emotion', Biennale of Sydney, Sydney 2004, Museum of Contemporary Art, 2004
'Cinema Capacete IV', Rio de Janeiro, Brazil, 2004
'World without End', Australian Centre for the Moving Image, Melbourne, 2005
'The Elightenments', Edinburgh International Festival, Scotland, 2009

Susan Norrie's acclaimed video 'Enola' depicts a dreamy, otherworldly landscape of global icons in an exploration of the effects of nuclear war on the city of Hiroshima. At first, the viewer is lured into a charming miniature world as the camera slowly pans through the architectural theme work in Tobu, Japan where 102 buildings from the Eiffel Tower to St Peters Basilica to the World Trade Centre are built 1/25 of their actual size and set in a landscaped garden.

The lullaby-like soundtrack of Burt Bacharach's 'Walk on By' and Disney's 'It's a small world' is used 'to lull people into believing in a Brave New World' . Norrie cleverly plays with the effects of real documentary footage and an imagined fantasy land. Her use of slow motion grainy shots induce a childlike wonder and diversion while a stronger perhaps more serious message about the state of our world is conveyed. Ultimately the video is a celebration of humanity's resilience in the face of adversity.

'Enola' was first shown in 'On Reason and Emotion', Biennale of Sydney in 2004 and has been in many international exhibitions since. Others from the small edition of 6 are held in the collections of Art Gallery of Western Australia and Queensland Art Gallery. 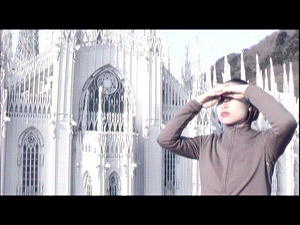