Kate Rohde's art explores humanity's curious relationship with the natural environment, the culture of collecting and the commodification of nature. The young Melbourne artist is well known for her intricately detailed sculptures and installations, which often comprise of 'cabinets of curiosities'. These startlingly original works make reference to the display conventions of the natural history museum, while channelling the opulent aesthetics of the Rococo and Baroque eras.

Lovingly and laboriously crafted from common synthetic materials, Rohde's faux-taxidermy animals and exotic floral arrangements have become increasingly elaborate over the yeas. The vitrines which house the dioramas have also become intricate works of art in themselves, cast and encrusted with crystalline resin flowers. Lime Green (Bird of Paradise) was initially shown as part of Rohde's solo exhibition 'In My Nature' in 2007. This body of work was the first to see the vitrines injected with colour, marking an important development in her practice. The brilliant lime of this display case perfectly matches the feathers and flora, drawing attention to the 'unnatural nature' of the display. Rohde invites the viewer to enter a realm of fantasy whilst motivating contemporary discussions regarding ecology, extinction, taxidermy and preservation. 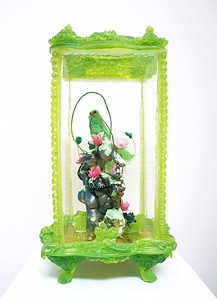