Louise Hearman's work is characterised by a sense of unease and the uncanny, often produced by the extraordinary treatment of ordinary objects and living beings. Her paintings are highly idiosyncratic and feature reoccurring themes such as empty roads, airplanes and floating figures - often animals and children. In 'Untitled #898' (2002), a dog's head hovers just above the ground. Both the dog and lawn look domestic and would appear perfectly natural were it not for the animal's absent body.

Hearman gives exquisite detail to the rendering of the canine's form, as well as the shadow it casts across the grass. By fixing her subjects with an intense white light, the Melbourne artist evokes a subtly eerie atmosphere. We are drawn inside her strange world, but also kept at a certain distance, never fully knowing the meaning of it all. This ambiguity produces an important tension in Hearman's paintings, and is further amplified by the artist's consistent use of the titling convention 'Untitled'. 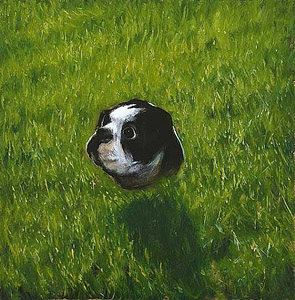