Janet Laurence's art explores our relationship with the environment and is often produced in response to specific sites or natural systems. The work 'Glass of Ash' (2006-07) is part of the artist's 'Landscape and Residue Series' which evolved from her observations of the Australian landscape's resilience following bushfire devastation. She has said of this series, "I am thinking about the preciousness of regenerating growth and attempting to resuscitate and offer a life support system to our ailing environment".

Laurence's work often inhabits 'in between spaces'. It seeks to dissolve boundaries between the gallery and the urban and natural landscape, between ephemeral and permanent states. 'Glass of Ash' is an excellent example of this transience: it captures a state of flux and a poetics of space and materiality. Using a combination of Duraclear (which resembles a sheet of acetate), oil and acrylic, the artist imbues the layered work with a translucent quality. It is a commanding and permanent art piece, and yet seems to hang weightlessly on the wall. 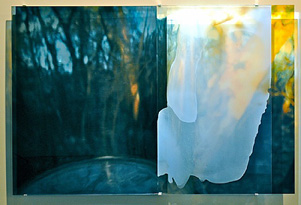