Study for an Art Gallery with staircase and lift access, 1998
oil on canvas
60.0 x 40.0 cm
signed, dated and inscrbed with title (on the reverse)

Provenance
Imperial Slacks, Sydney
Acquired from the above by the present owner in 1998

'Study for an Art Gallery with Staircase and Lift Access' is an early work by the significant Australian artist. It was created and exhibited in 1998 at the Imperial Slacks Gallery, an inner-city artist run initiative that Gladwell co-directed with several of his contemporaries. It marks a dynamic time in the artist's early career and is suggestive of the future directions his practice would take. Painting was central to Gladwell's training and continues to play an important role in his multi-media practice. Moreover, the artist sites painting as a pivotal influence on his renowned digital media artworks.

This intimate oil on canvas flaunts the artist's proficiency as a painter, as well as pointing toward Gladwell's signature interests in the Australian landscape and notions of the sublime. In the dream-like painting, a large cloud hovers above the vast landscape with a staircase and elevator ascending to the amorphous form. The title suggests that this is the artist's surreal imagining of a gallery, an allusion perhaps to the elusive and intangible nature of the art institution for him at that time. Given Gladwell's current status as one of the key figures in Australian contemporary art, the painting is now charged with a delightful irony. 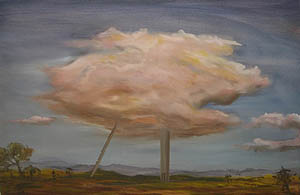