Provenance
Mori Gallery, Sydney
Acquired by the present owner in 1987

Cressida Campbell's woodblock print 'Gum Blossom', 1987, is a still life study of a blossoming native gum rendered in the distinctively Australian palette of green, white and gold. Intimate in scale and subject, Campbell's art reflects the everyday. It is the composition of the image that gives the work its' dynamism, or what the artist refers to as "the subtleties of design and pattern". While the Australian subject matter recalls the work of Margaret Preston, the process and stylised aesthetic suggest an appreciation of Japanese Ukiyo prints. Beginning with a design drawn onto a sheet of plywood, Campbell meticulously carves each line of the illustration with a fine engraving tool. She then uses delicate brushes to apply layers of watercolour to the individual segments, before printing the final paper impressions. 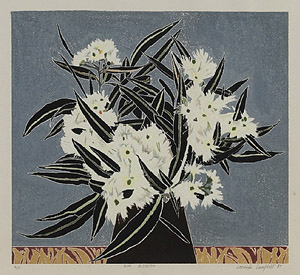 Image courtesy of Rex Irwin Art Dealer and the artist

☆ Add to wishlist
Cressida Campbell is a Sydney-based artist who works in watercolour, painted woodblocks and woodblock prints. Her work, which follows in the traditions of Margaret Preston, Giorgio Morandi, Thea Proctor and her friend the late Margaret Preston, is celebrated for its beautiful and poetic depictions of everyday domestic scenes, landscapes and still lifes.

Born in 1960, Campbell studied at East Sydney Technical College from 1978-1979, followed by a year of study at the prestigious Yoshida Hanga Academy, Tokyo, Japan. The Academy was founded by Toshi Yoshida (1911-1995), a renowned woodblock printmaker of the shin hanga (or ‘new prints’) tradition who was the son of Hiroshi Yoshida (1876-1950) one of the great Japanese printmakers of the early twentieth century. Toshi Yoshida was also a pioneer of the sōsaku-hanga or ‘creative prints’ movement, in which the roles of designer, carver and printmaker were all assumed by the one artist instead of being performed by separate craftspeople.

Drawing upon sōsaku-hanga and broader Japanese woodblock printmaking traditions, Campbell creates prints and paintings that refer to and invert the traditions of the woodblock print. Often taking up to two months to complete just one work, her technique is often painstaking. First, she draws a scene from life onto a wooden block. (Campbell has said “If the drawing is wrong, then everything goes wrong.”) Next, she carves out the details of the image; she then paints segments of the block with layers of watercolour paint; and, lastly, she sprays the final object with water, often to take just a single print. The painted blocks themselves will often then become artworks in their own right, a celebration of the woodblock printing process which is so often ignored or concealed behind the beauty of the final image.

Campbell has exhibited extensively over the past four decades and is widely represented in Australian and overseas public and private collections, including the British Museum, London, and the National Museum, Krakow, Poland. In 2009 a major survey exhibition of her work, Timeless: The art of Cressida Campbell was held at the S.H. Ervin Gallery, and subsequently toured to the Queensland University of Technology Art Museum, Brisbane. A major monograph, The Woodblock Painting of Cressida Campbell, was published in 2009 by Public Pictures, Bronte, edited by Peter Crayford and with a forward and introduction by Edmund Capon and John McDonald. Campbell has won the Pring Prize and the Trustees’ Watercolour Prize, Art Gallery of New South Wales, Sydney, and has received an Australia Council for the Arts Verdaccio Studio Residency in Italy.