Bill Henson's bewitching photographs unite formal and classical representation with the gritty drama of the everyday. In 'Untitled 2000-2001' a girl at the crossroad between childhood and adulthood emerges from the darkness and gazes away from the viewer. Occupying the ambiguous space of adolescence, the girl is emblematic of the complexity of human existence: both innocent and wise, she appears both ready for what the future holds and overwhelmed by it. In this work, Henson's refined chiaroscuro has been used to great effect, evoking both the painterly and the cinematic. Beautiful, compelling and confronting, the work captures a universal essence, according the viewer with a heightened awareness of what it is to be alive. 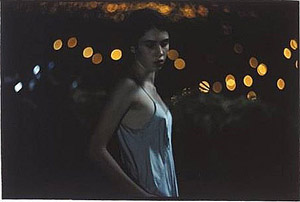