Provenance
Rex Irwin Art Dealer, Sydney
Acquired from the above in 2003

Precisely balanced in a serene composition: two cups, one bowl, two bottles and five beakers sit together in quiet contemplation on a shelf in Gwyn Hanssen Pigott's 'Pause' (2003). The careful placement of each of the objects in relation to one another, defies the apparent functionality of the items, imbuing them with a metaphysical potential that transcends the ordinary. Together, the objects evoke a powerful sense of social relations, travel and movement as the elegant porcelain pots, cups and bottles stand in for human forms seen to be standing, sitting and squatting. Pigott's 'Pause is also an expression of time, expressed through intervals, repetition and variation. 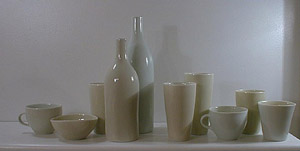 Courtesy of the artist and Rex Irwin Art Dealer, Sydney

☆ Add to wishlist
Born in 1935, Gwyn Hanssen Pigott is one of Australia's most acclaimed contemporary potters with a career spanning five decades. She is best known for her elegant still life arrangements of delicate porcelain bottles, pots and vessels, which appear to form intimate portraits referencing human forms and relationships. These works, which she began creating in the late 1980s are inspired by the still life paintings of the Italian twentieth-century artist Georgio Morandi, and her palette is derived from the China's Song Dynasty wares introduced to her in her early apprenticeships with influential English potters such as Michael Cardew and Bernard Leach.