Provenance
The artist
Acquired directly from the above in 1998

A relatively early work by Lucy Culliton, 'Shell Painting' (1998) depicts five shells from the artist's grandmother's shell collection. The shells are beautifully rendered in muted tones that reflect the shapes and shadows in a soft, gentle light. Painted with such exquisite detail and attention, the shells are ascribed a very personal and genuine attachment, one which elevates the objects' significance despite their apparent lack of conventional value. This work is indicative of Culliton's skill in engendering seemingly inconsequential objects with the essence and power that comes from the artist’s emotional response, immediately drawing the viewer into the sensual depth of the painting. 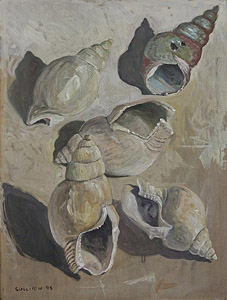 ☆ Add to wishlist
Born in Sydney in 1966, Lucy Culliton worked first as a graphic designer before graduating with a Diploma of Fine Arts from the National Art School, Sydney in 1996. Culliton, who lives and works in Bibbenluke, NSW, is a highly accomplished painter whose sophisticated use of texture and colour renders her modest subjects with sensory potency. Common motifs range from roosters, shells, crockery, cups and saucers, knitted toys and cacti to animal and prize displays at local shows. Of these familiar but often overlooked subjects, Culliton has stated "I like to paint the ordinary and make it important".

In 2014 'Eye of the Beholder: The Art of Lucy Culliton', Culliton's first survey exhibition was held by the Mosman Art Gallery, Sydney. Culliton was awarded the Portia Geach Memorial Award in 2006 and the Mosman Art Prize in 2000. She is a regular finalist in the Archibald, Wynne and Sulman Prizes at the Art Gallery of NSW and her work is held in many important public and private art collections. Lucy Culliton is represented by The Hughes Gallery, Sydney.